Its end of year list making time! Don’t tell me you’re not excited at the thought. Rather than a list of my personal highlights (Bali, Tomatina, skiing with my family if you’re wondering). I thought I’d reflect on what my ‘Austrian Achievements’ have been for 2014, with an eye to keeping track of my progress for the next year.

So, in no particular order here’s a few Austrian skills I’ve adapted this year – if there’s something you’d like to challenge me to do in 2015 please do so in the comments!

I was never a great cyclist. I learnt on the bike paths of the outer Melbourne suburbs with my Dad and siblings on a mountain bike, but never really got the hang of being a ‘city cyclist’ back home. It seemed too intimidating and involved – do I have to know how to fix a bike chain? What shoes do I wear? More importantly, how flat will my hair be after wearing a helmet to ride to work? All of these factors meant I had no notion of the sheer joy of riding a bike everyday, helmet free in a well-equipped-bike-friendly city. Austria changed that for me and now, even in -3 degree temperatures bundled in gloves and scarves I love riding my trusty bike around the city. Austrian Achievement unlocked!

Winter sports were always kind of an entertaining joke to me – like ‘Oh, they have winter Olympics, how cute’ with barely a thought given beyond that. Here in Austria of course its another story. Ski racing is watched religiously on a weekend morning (at least in our Tirolian influenced household) and the Winter Olympics are serious business. I graduated to all-out winter sports support in January of 2014 when we were lucky enough to get a hold of tickets for the Four Hills Ski Jump tournament in Innsbruck. We got to witness the absolutely batshit-crazy-insane ski jumpers launch themselves ridiculously high into the air and float down to earth with skis attached. Its mental…check out the video below:

It was terrifying, breathtaking and so so much fun. The crowd was rowdy but in a friendly way and, natürlich, we had to hike a wee hill in order to witness the event. Completely Austrian experience. I’ll be backing it up in 2015 by visiting the world famous Hahnenkamm race in Kitzbühel for the first time!

Uncovering the Indie fashion of Vienna

Just over a year ago, I bemoaned the lack of ‘fashion’ in Vienna in this particularly popular post. Just over 12 months later and I am pleased to say that things have definitely turned around. I’ve uncovered a few golden gems with a mix of nordic and local fashion offering an alternative to the High Street chain stores. A few favourites include Kauf die Glucklich on Kirchengasse, the stretch of indie stores along Schönbrunner strasse in the 5th district and the occasional indulgence from Massimo Dutti in the 1st. Definite advancement in Austrian fashion stakes this year – but I still need a fix of Black Milk tights every now and then. Lucky for me a generous soul got me some for Christmas!

The hipsters of Vienna were pretty excited for it to open

After some wonderful tips and advice from you lovely readers on this post, I started watching Tatort. The opening credits alone are worth it for their 70’s kitschiness, but the different accents, not-too-complex-storylines and social themes have really helped my German vocab and understanding. I don’t think i’ll be needing to solve any crimes in German anytime soon, but its been fun to muddle along in Deutsch on a Sunday night. I’ve heard there’s a Bar/Cafe in Wien that shows the episodes on a big screen to a huge crowd, so as soon as I get myself there I think I can rightfully claim to be pretty on track to Authentic Austrian status!

It seems silly, but it took a ridiculous song contest to make me feel, even momentarily, that I was a true Austrian. When Conchita won earlier this year, I was screaming, whooping hopping and clapping for joy. Our little Aussie posse who got together to watch Eurovision in all its camp glory were thrilled to see it unfold and banded together in celebration. I walked home that night along the city streets ready to embrace anyone, to see people pouring out of bars with grins on their faces and felt there was hope for all of us in an Austria that supported Conchita, and dammit I was proud to be living in that kind of country. My gushy explanation immediately following the event itself is here.

Better than my average mirror selfie (see above!)

All these little pieces are helping to build my Austrian lifestyle – but I couldn’t do it alone. This blog and our little community here have done more than you can imagine to keep me excited about my emerging Austrian life. Thank you to anyone and everyone this year who shared a post, told a friend about the blog, Tweeted about it or to me, shared my posts on Expat forums, liked it on Facebook, left a comment, mentioned it in a bar, wrestled their partners to read it or generally got involved. I really appreciate each and everyone of you and cannot thank you enough. Let the madness and growth and love and sharing continue in 2015! 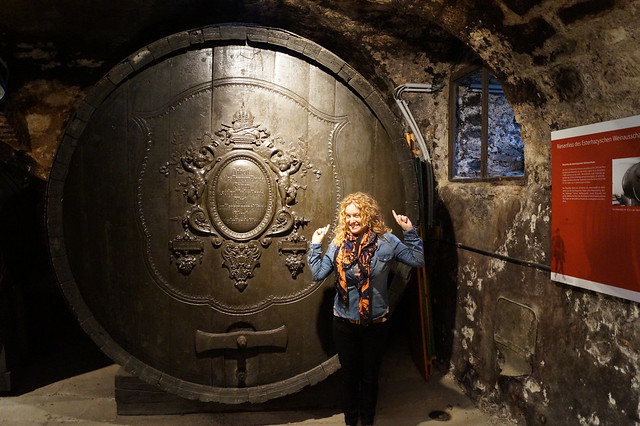 We can celebrate with THIS MUCH wine!

With continued growth in mind, what Austrian activities should I challenge myself to achieve in 2015? I think trialling Latella is definitely up there, along with improving my skiing and maybe mastering the fine art of baking a Guglhopf…tell me your best ideas and I’ll rally to the challenge in this new and exciting year…Guten Rutch!!