Italy in the summertime is about as close to a picture perfect holiday as you can get. Beautiful people, ancient ruins, tasty gelato and beaches of bronzed bodies, all of them talking with big hand gestures and oozing European cool. Wine, antipasto and long lazy evenings are the order of the day.

Life is always this fantastic in Italy – breadsticks, wine and beautiful people

As a last-minute birthday surprise in August, we headed to the Venezia region with two close friends, planning to indulge in some wine tasting, stroll the Piazzas of Venice and live the bella vita – what could be easier?

Turns out, everything. Everything could have been easier. We chose one of the wettest summers on record (according to our chatty cab driver) to visit. We ended up driving laps of the highway entrance to Venice. We lost €100 buying a single slice of Pizza.We got stuck in traffic trying to find Jesolo. We spent 1.5 hours on a local bus because we left it too late to get the direct connection to our hotel. We managed to visit Venice on possibly the greyest day I’ve ever seen there. 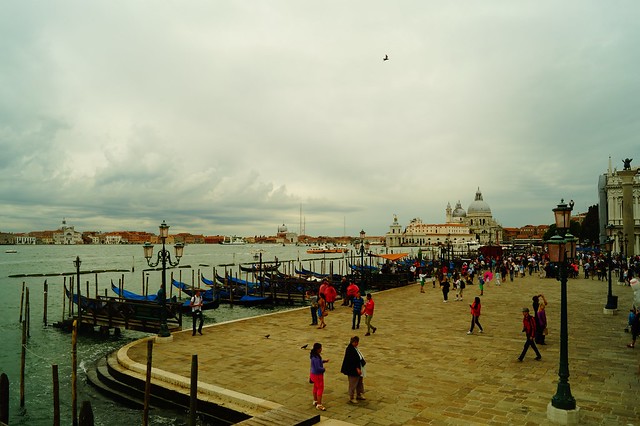 View from the Bridge of Sighs with storm clouds approaching

And every disastrous minute of it was wonderful.

They say travelling is a true test of a relationship, whether that be with your partner or your friends. I’ve seen some pretty epic bust-ups over my years of working in travel, especially when people are tired, hungry, confused and frustrated. All 4 of us were at one point suffering from a combination of those emotions, but managed to make it back to Vienna having not killed each other, which was a minor miracle.

The itinerary was Vienna – Padua – Venice. Padua was the exciting part for me, mostly because I’d never been, plus it appealed to my inner Shakespeare nerd (The Taming of the Shrew was set in Padua, I guess I was hoping for a theatrical bout of witty banter in the city square?). The icing on my nerdy cake was that Padua boasts the second largest city square in Europe and who can resist an architectural wonder? Not I. The square was so big in fact that I couldn’t fit it all in one photo: 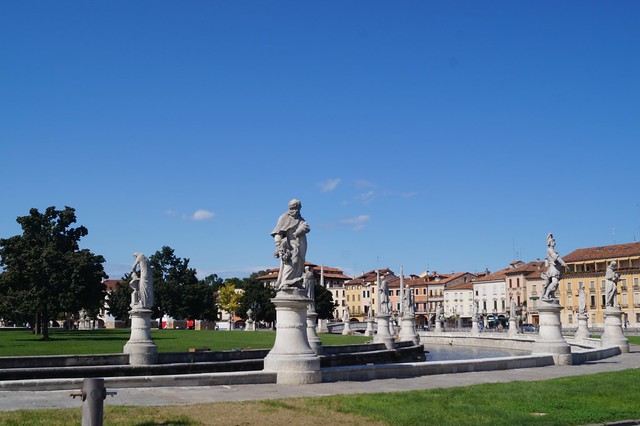 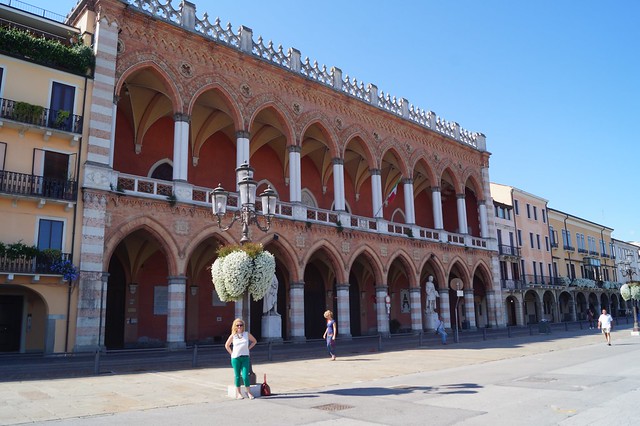 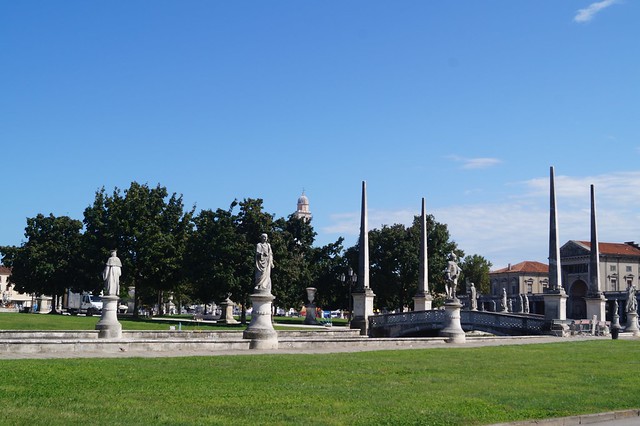 Padova was classically Italian and beautiful. We even managed to find a favourite restaurant and time our visit with their epic fireworks display for the Festa di Ferragosta*. Although we got a bit lost at some points, we spent most of the afternoon discovering picturesque squares, attempting to speak Italian, taking the occasional ridiculous selfies and eating. Oh the eating. 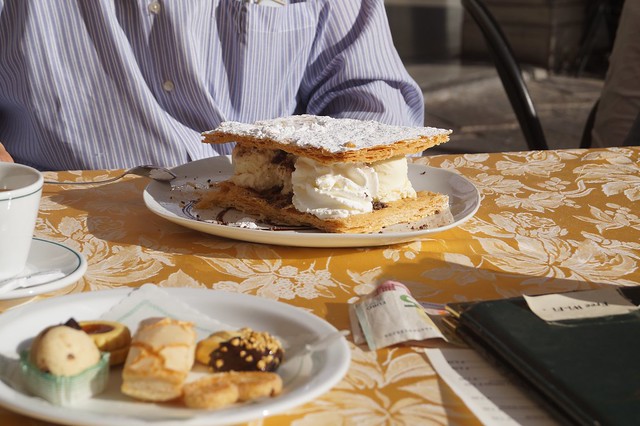 Day two was Venice discovery day and depending on your point of view, it was either an unmitigated disaster or an hilarious shambolic success. Despite losing €100, getting caught in the rain, killing my knees wearing stupid shoes and being frustrated by the fact that a group of 4 people on holiday take at least 15 minutes to make any kind of decision, I had a fantastic time. 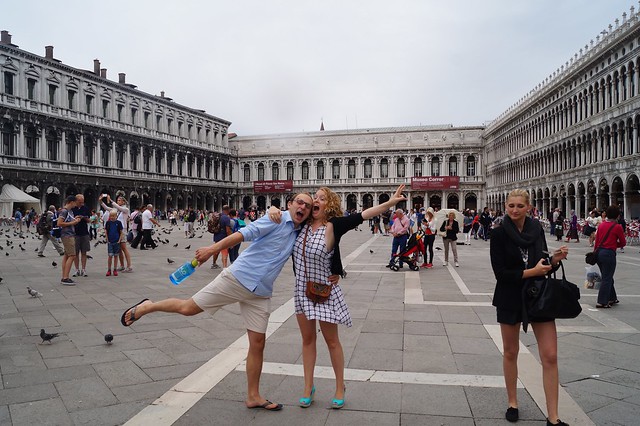 Note ridiculous shoes, grey skies, the smudge of rain on camera lens…and us, blatantly ignoring it all.

I’d been to Venice so often as a tour guide that it was a delightful change to relax, go to the outlying islands and switch off my brain to meander like a tourist for once. Oh, and did I mention the wine and eating? 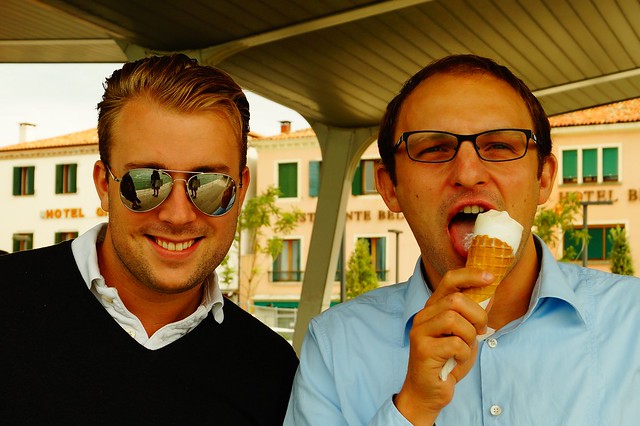 Gelato eating in particular. This may be my favourite photo of all time.

By Sunday we were ready to go home, having gorged ourselves on Italian life – I’m pretty sure my metabolism is not built for endless plates of pasta, bottomless wine glasses and prosciutto by the boatload. S had one last birthday surprise in store for me though. He talked us into a slight detour, which seemed like a disastrous decision when we were crawling through the Italian countryside, stuck behind campervans, geriatric Austrians and cars full of Italian families. The payoff was worth it though. After a 2.5 hour detour we arrived here:

That my friends is a beach. An honest to god, sand in my toes, 35 degrees in the sunshine, salty ocean water beach. My Australian heart leapt at the site – it had been a long, long time between beach visits and it’s the one thing that Austria can’t offer me. Family can visit, friends can Skype but Austria just doesn’t have the long sandy salt-water beaches of Australia. Except for this particular Sunday – we found Jesolo beach in Italy. On this Sunday, with my close friends, it was just about damn perfect.

The face of sheer joy, right beside the squint of a man without sunnies

*History nerd note: This festival allegedly began with Emperor Augusta from Roman times encouraging people to celebrate a ‘lazy summer break’ in reward for the hard work of harvesting agriculture. BONUS FACT in the Fascist era it was a 2 to 3 day holiday break where lower social classes could cheaply get access to the Italian mountains or seaside through Government organised trips. Nerd fact win!