I may joke about it often, but when it comes to healthy living, Austrians really do have their priorities straight. Getting up early on a Sunday to go for a hike in the woods was never, ever my idea of an ideal Sunday morning, but here it seems to be a regular family habit. There’s a few ways that the Austrian attitude to healthy living, traditional home-made meals and body image in general has started to impact my own attitude to fitness and, shockingly, shifted my Sunday focus to hiking instead of brunch. Well, at least to hiking a little bit BEFORE brunch. Here’s why:

1. Austrians think about exercise socially. Throughout my life (and maybe this is different for the dedicated fitness fanatics) I always thought of exercise as work. Not a fun pastime, but hard, time-consuming work and effort. You HAVE to go to the gym screamed TV, magazines and (loudest of all) the guilty voice in my head. Sports and P.E class in school were enforced – despite my very clear lack of skills in the ball-throwing department. Running was about the most tortuous thing I could imagine (still is). I tricked myself into exercise by doing fun things, like dance, ballet, calisthenics and running around in drama classes. But here, exercise is a means to a social end. Hiking is something done with a group of friends with beers to celebrate afterward in a local hut. Volleyball teams spring up at the drop of a hat in summertime. Skiing is about the most social sport I know – with the little breaks for schnapps making it a particularly appealing ‘sport’ – generally done in friendly groups. The point being, Austrians don’t see sport as work, it’s a natural extension of their interaction with their mates. Genius.** 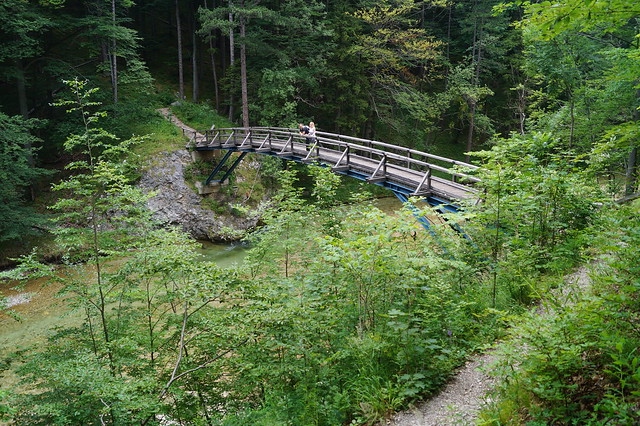 The views when hiking on a Sunday don’t hurt

2. Austrians accept their bodies. When I did join a gym my first year in Austria, the number one thing I noticed was the ease with which the women around me accepted their bodies. Not in a flaunting way, but in a very ‘take-it-or-leave-it’ nonchalant manner. It was incredible. They were of course in a gym to exercise, but there was none of the ‘I hate-my-x-body-part’ and ‘oh I wish I was a size ten like you’ negative type of conversation and behaviour that is so ingrained in Aussie women. Australian (and I think Western) female body culture is primarily about shaming yourself for being fat or not having a thigh gap, or not being ‘curvy’ in all the right places. Here, women of all shapes and sizes were comfortably wandering around the change rooms naked- young, old, fat, thin, hairy, freckled, you name it. This is a society completely at ease with its human form. Either that or I was deeply misunderstanding the old ladies’ german conversations. Why and how did they get so confident? Well, I think it’s because…

3. Austrians are around naked bodies from a young age.  I haven’t yet written about my first European sauna experience. That story deserves a post all of its own, but suffice to say, it was my third date with S and definitely more than I bargained for! What I’ve discovered since that shock introduction to nude-friendly folk, is that Austrians are much more comfortable with their bodies. Whether they are in the sauna, or sun baking at a nudist beach or even generally sitting by a lakeside, there is a 95% chance that someone nearby will be naked. Not gratuitously. Just straight up enjoying the sauna/beach/lake with their kit off. Austrian kids are surrounded by this attitude their whole lives. I’ve seen families swimming in a lake all completely naked, together with their young children. Rather than being creepy – which would be the classic reaction of my repressed inner-Englishwoman – it seemed natural and normal. In fact, thinking on it afterwards, I wondered if our ‘western’ repressive, overly-politically-correct attitude to nudity may contribute to the high rates of anorexia, bulimia, not to mention obesity in Australia and the US. If kids see realistic human bodies in their own backyards or beaches with their scars, flaws and rolls, instead of bodies that are photoshopped or distorted from plastic surgery, surely that can only be a good thing? I’d love to know what you guys think…

Non-gratuitious and most definitely non-sexy nudity by the lakeside (stock photo imagery used!!)

4. Have you seen older Austrians?? They are a hardy, hearty bunch. Whittled from years of hiking, being outdoors and I can only assume a super-human strength to digest and process metric tonnes of pork and potatoes over a lifetime, older Austrians are extremely healthy. It can’t hurt that the government helps support retirees by sending them on yearly ‘health and wellness’ retreats for 2 weeks, known as ‘Kur‘. This is part-funded by the government and from the look of Austrian retirees I’d say a worthy investment. This is, uh, not quite what all older Austrians are like….but ridiculous Arnie photos are the best!

5. Incidental exercise is easy. In Vienna safe bike lanes are plentiful. Elevators in old-buildings are slow, or non-existent, so you take the stairs. The city is flat and well-designed enough to walk around it without excessive exertion. You can get by without owning a car at all, which removes the temptation to sit in it for ten minutes instead of walking for twenty minutes to get to your destination.

All in all, Austria makes enjoying exercise feel easy, rather than like hard work. This weekend they even had an entire festival in Heldenplatz to celebrate and encourage people to play more sports, the ‘Tag der Sports’, full of different sports clubs promoting their specialties:

Where Judo suits were accepted and cool 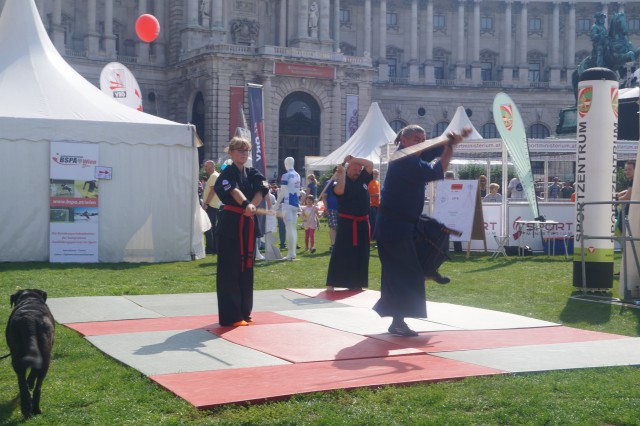 I have no idea what sport this is, but it looks totally badass and ninja related

In short, the Austrian attitude to sport is teaching me the simplest of lessons – to finally enjoy it, and embrace the body I have. To find the form of exercise that works. For me that’s a mix of cycling to work, early-morning Blogilates sessions and yes – hiking on a weekend with S. And if you need the lure of a delicious brunch at the end to keep you going, that’s ok too.

Home-made brunch is the best brunch!

**NB perhaps this is true of any country, but as I am, ahem, a slow developer in the ‘enjoying sports’ realm I’ve only noted the Austrian penchant for it!!